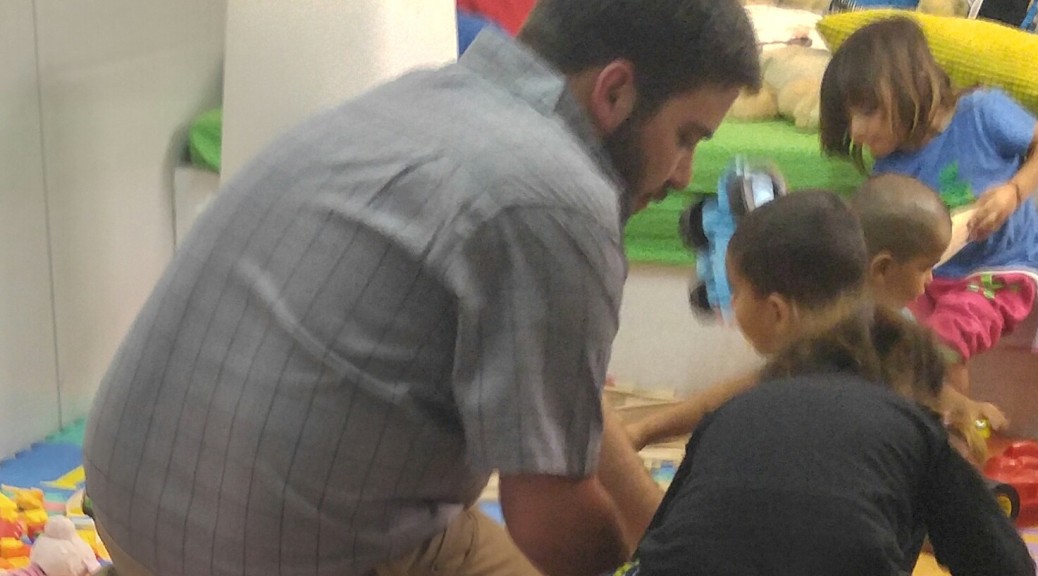 (Ritsona Refugee Camp, Greece) —  Inside of the big barbed wire fence that encompasses the camp area lies a unique space. At first glance this may seem like an old shipping area defaced with graffiti, murals of space, and mermaids, but it is actually the Child Friendly Space (CFS) of Ritsona Refugee camp.

Directly in the center of camp is a building made up of many shipping crates called ISOBOXES. These buildings are covered in murals, paintings, and words. This is the play area for the many refugee children that stay in the camp.

With war raging in their various home countries, many families have fled their homes and lost that sense of community that is so akin to Middle Eastern culture. Many of the young children in the camp have never experienced it at all. This is why experts conclude that ‘play-based’ fun of the CFS is so beneficial to the children’s wellbeing.

“Really repetition and consistency are amazing for children who have faced trauma and it helps their brain development,” said Alisa Goldstein who is the CFS Manager at Ritsona and a licensed play therapist. “I think it’s the most important thing I think we can offer in the space.”

Unfortunately, Goldstein suggests, for these young mental or physical trauma survivors the battle isn’t over yet. Although onset time varies, many children who have experienced trauma at a young age have a much greater risk of developing a mental health condition later in life, she says.  PTSD, severe depression, generalized anxiety, and panic attacks are just some of the possibilities.

With careful monitoring and a variety of help, Goldstein believes, mental health conditions can be effectively managed greatly lessened.

She says the innate problem is that these camps were never meant to be permeant structures. Many camps don’t have more than a few psychiatrists, some have none on site at all. They don’t have the funding or staff to carry out all these sessions and consultations that would be needed to maintain the ever-growing number of mental health cases in the camps.

With a lack of professional psychologists at camps, the volunteers who run activities at camp have started to see their role as providing the needed therapy…

One example is Jason Steinberg. Steinberg’s official position at the Ritsona camp was the director of The International Sports and Music Project. He helped set up a music program and a number of soccer programs at Ritsona with the help of the Non-Governmental Organization (NGO) ECHO-100 plus. Steinberg says he came just a simple music teacher with an urge to help, but he soon came to realize the impact his music lessons and soccer play were having on the young people’s emotional health.

“I think I look at sports and music as therapeutic, I don’t necessarily think of it as a form of therapy, more of a creative outlet, said Steinberg.  “In Ritsona, you’re in the camp for a long time, it’s a great to have an outlet to deal with life here… Whether you’re happy or sad or just need something to kill time, these kids now have an outlet.”

Several soccer teams have sprung up around camp and with Steinberg and ECHO’s help they were able to buy soccer cleats for the teams in the youth space. Steinberg has since left, but his program is still going strong. Because of the impact on the refugees in Ritsona, He now has plans to set up similar programs in various refugee camps around the world.

Yet another Ritsona volunteer has found the therapeutic value of yoga, especially with the female refugees.

“The yoga program is amazing, it’s very easy to learn and you an do it anywhere. I’ve seen people take what they learn and practice it in their homes with friends or their kids,” said Samantha Huber, the yoga instructor at Ritsona.

“It’s wonderful because many of them don’t realize you’re helping them treat emotional problems, they’re just doing yoga,” said Hubner. “We tell women when they can feel their heart beating heavy to do this and breath like that, but really, we’re providing destressing methods. For a culture that doesn’t enjoying talking about mental health issues, this is very useful to help.”

Volunteers at the camp’s Children Friendly space say they can see impact of play therapy, even if it is not a formal therapy setting. Those running CFS say it is great for the socialization of children.

“We are considered a psychosocial group, although I like to think of us more as just play based fun,” Goldstein stated. “We just don’t have the consistent skills to be considered a therapeutic setting.”

As a licensed play therapist, Goldstein sees something as being extremely useful with this population.  She describes play therapy as a one-on-one program in which a play therapist uses the methods of play to help children express their feelings and deal with some of their traumatic past experiences. Without this tool, she says, many of them may not be able to express these feelings in words yet.

Play therapists also help with emotion therapy, where many children learn about emotions and how to express them. This is something that in some cases, children actually teach their parents about.

With the war and the trauma that refugees go through, Steinberg says, “often times people tend to forget refugees are normal people just like us, and face the same everyday issues as anyone else.”

“All I want to do is be able to sit on the beach and play “Hey There Delilah” on guitar and attract some girls,” said Steinberg’s student who wanted to go unnamed. Steinberg says, “soon he will be able to fulfil that dream.”