The OU Refugee Report is a publication focusing on the plight of refugees  fleeing war and persecution across the globe.  The reporting focuses on the stories of refugees who have found themselves in limbo in Greek refugee camps and other temporary housing units as a result of an European Union/Turkey agreement that closed down most of their migration routes.

The reports that are part of this OU Refugee Report publication tell many of the stories of the 60,000 refugees in Greece now at the will of the international community — having been stopped in their pursuit of relocation in northern Europe.

The Refugee Report was created by a team of 13 Oakland University student reporters during the summer of 2017. 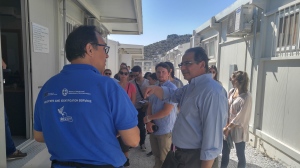 Under the supervision of instructor/director Cathy Shafran,  Greek journalists John Psaropolous  and Helen Skopis, and Israeli/American photojournalist Ricki Rosen, the student journalists spent time reporting on residents  in refugee camps across Greece, including  the Greek island of Lesvos that sees the largest containment of incoming refugees. 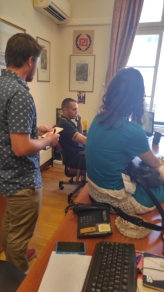 The staff reporting also included a briefing at the Greek Parliamen with alt-right anti-immigration party officials.

The work on this site is intended as a window to the rest of  the world to learn more of the plight of tens of thousands of refugees still looking for a new home for their families – safe from the violence they fled.